THANK YOU for an amazing World Bank Action Day!

Many people around the world have send the bank – through letters, research, protests – a clear message: Get out of all fossil fuels and stop all public support for fossil fuel investments!

Here are some examples of the creative protests that took place on October 14/15 2021.

Visit urgewald.org for the latest information on the World Bank’s climate wrecking operations.

The World Bank Drives Billions upon Billions into Fossil Fuel Investments:
World Bank – Get Out of Fossils!

Around the world, climate change is intensifying the destruction and human suffering caused by severe weather events, including, inter alia: flooding, hurricanes, drought, heat waves and forest fires.
UNICEF reports that a billion children worldwide are vulnerable to the effects of climate change. The World Bank states that without urgent action, climate change will push more than 100 million people into poverty by 2030.

The burning of fossil fuels is the biggest contributor to the climate crisis. No fossil fuel investments are needed to provide energy access to the poor because existing renewable energy technologies are already the best option. As such, the UN Sustainable Energy for All initiative states that “financing of fossil fuel projects as a means of closing the energy access gap should be terminated.”

There are no more excuses, no public assistance should be used to boost or prop up the development of fossil fuels. Yet the World Bank is still using its public funding to drive billions and billions into fossil fuel investments, including coal.

From October 11 to October 17 2021, the World Bank will hold its annual meeting in Washington, D.C. Together with partners worldwide, we want to use this meeting to move the bank’s destructive support for fossil fuels into focus. On WORLD BANK ACTION DAY on October 14/15, we are calling on YOU to make your protest visible – on the streets, in front of the World Bank offices and on social media, 24 hours around the clock at noon in your time zone. #StopDrivingFossilFuelInvestments

In the lead up to the World Bank Action Day, hear from panelists from around the world calling for an end to World Bank fossil fuel finance. This Wednesday, October 13! Register here 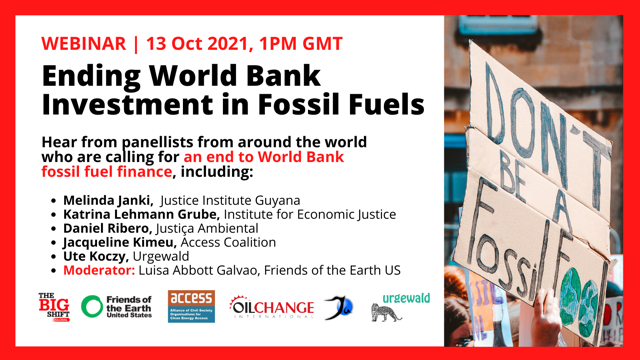 Join us on social media: